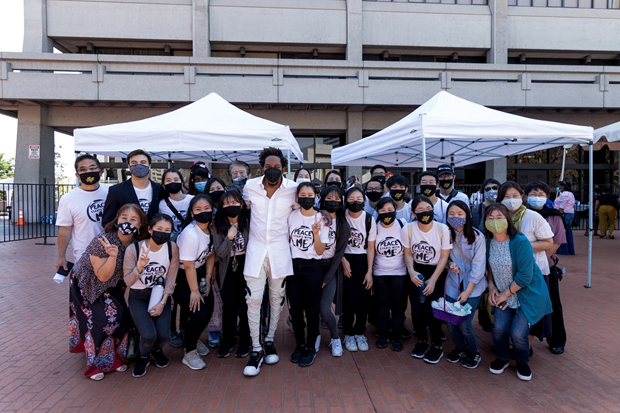 Azusa Street Revival came alive on Easter Sunday at the JACCC Isamu Noguchi Plaza. A multicultural congregation of Blacks, Asians, Hispanics, and Whites celebrated Pastor William Seymour, son of slaves, who founded a multicultural congregation at 312 Azusa Street on April 9, 1906. The historic location within the borders of Little Tokyo witnessed one of the greatest spiritual revivals in history and became the Cradle of the Worldwide Pentecostal Movement which has touched over 800 million worshippers today.

Pastor Patrick Deitrick Haddon of the Hill City Worship Camp and Storyteller is a well-known gospel singer, songwriter, music producer and actor. He invited CARP, a Choir of Japanese students led by Pastor Mark Tegan, to perform at the event. CARP is composed of students from local colleges who presented “Principles Worth Living” in a progressive and contemporary gospel style.

Inspired by Pastor Seymour’s mission, Mickey Stevenson is writing and producing a play, “Azusa Street Revival the Musical”, which will feature Pastor Haddon as Pastor William Seymour and debut at the Aratani Theatre in the Fall. The plan is to tour the play bringing the inspirational story of the Azusa Street Revival to audiences around the country and the world.

Mickey Stevenson is one of the great figures in the history of Motown records. As their A&R (Artists and Repertoire) executive, he helped discover Stevie Wonder, the Four Tops, Martha Reeves and many others who went on to bring the distinctive Motown sound to audiences worldwide.

The Azusa Street Revival which began on April 9, 1906 also has special meaning for the 3,000+ Japanese Americans who fled San Francisco after the earthquake on April 18, 1906 and moved to Los Angeles. Many settled next to a segregated African American community and formed what is currently Little Tokyo.

Before the earthquake, San Francisco was embroiled with racial antagonism, fed by inflammatory articles in the press against the Japanese immigrants. In 1905, the San Francisco Education Board proposed that the Japanese American students should be separated from white student and segregated into their own schools like the Chinese students. The proposal was opposed by the Japanese government because it treated the Japanese students like they were second class citizens. The opposition resulted in the Gentleman’s Agreement. But in May of 1905, a Japanese and Korean Exclusion League was organized and on October 22, 1906, the San Francisco school board arranged for all Asian children to be placed in a segregated school.

The Azusa Street Revival is important because it stands as a beacon against racial discrimination and injustice that was so prevalent at the time. The Pentecostal Movement was founded in Los Angeles and it was one of the first and few American Multicultural Religious Movement with which continued and grew to have world impact today. In this regard, William Seymour stands shoulder to shoulder with Nelson Mandela, Martin Luther King, and other great leaders of African descent in the 20th century.

Knowing neither its existence nor its historical significance, Isamu Noguchi, a world-renowned sculptor, convinced Mayor Bradley, the first African American Mayor of Los Angeles, to build a plaza on the site of the Azusa Street Mission. A theatre had been planned for the site. In 1980, Tom Bradley was able to convince the Japanese American Cultural and Community Center Board of Directors to create a plaza on the Azusa Street Mission site and locate the planned theater at its present location.

Mayor Bradley with Sculptor Isamu Noguchi discuss the creation of the plaza.

The Azusa Street Mission Foundation, Inc., a non-profit foundation (www.wordpress-390232-1227690.cloudwaysapps.com) , is working towards establishing Azusa Street as an Historical Cultural Place that will become the “Azusa Street Spirit Walk and Multicultural Spiritual Door to the World in the City of Angels”. It will embody the power of and faith of the Azusa Street Revival and Pastor William Seymour who created a multicultural congregation during our country’s Jim Crow era.

Just as Pastor Seymour openly welcomed and brought together Blacks, Asians, Hispanics and Whites to demonstrate the beauty and diversity of God’s wonderful creation, Easter Sunday at the JACCC Isamu Noguchi Plaza experienced a taste of that unity which is desperately needed today.