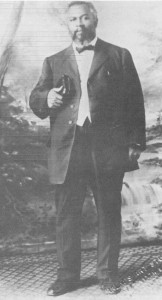 William J. Seymour was born the son of former slaves in Centerville, in the U.S. state of Louisiana. As a grown man he became a student at a newly formed bible school founded by Charles Parham in Houston, Texas, in 1905. It was here that he learned the major tenets of the Holiness Movement. He developed a belief in glossolalia (“speaking in tongues”) as a confirmation of the gifts of the Holy Spirit when he witnessed it from one of his followers. Itinerant, he moved to Los Angeles to minister. As a consequence of his newfound Pentecostal doctrine he was removed from the parish where he had been appointed. Looking for a place to continue his work, he found the Apostolic Faith Mission in a run-down building in downtown Los Angeles on Azusa Street.

From his base on Azusa Street he began to preach his doctrinal beliefs. Seymour not only rejected the existing racial barriers in favor of “unity in Christ”. This revival meeting extended from 1906 until 1909, and became known as the Azusa Street Revival. It became the subject of intense investigation by more mainstream Protestants. The resulting movement became widely known as “Pentecostalism”, likening it to the manifestations of the Holy Spirit recorded as occurring in the first two chapters of Acts as occurring from the day of the Feast of Pentecost onwards.